Highlights include new seasons of "His Dark Materials," "Gossip Girl," "Doom Patrol," "Sort Of" and the docuseries "Branson."

HBO Max announces everything coming to the platform this December including the third and final season of HIS DARK MATERIALS (12/5), based on “The Amber Spyglass,” the final novel in Philip Pullman‘s award-winning trilogy. In the final chapter of this epic fantasy series, Lyra (Dafne Keen), the prophesied child, and Will (Amir Wilson), the bearer of The Subtle Knife, must journey to a dark place from which no one has ever returned. But as her father’s great war against the Authority edges closer, they will learn that saving the world comes at a terrible price.

GOSSIP GIRL (12/1) is leaving no stone unturned in her effort to control the scandalous lives/spin the scandalous lies of Manhattan’s elite. She’s learned a thing or two from her first go-round – namely what her audience wants, they shall get. It’s time for her to turn the heat up on what’s been simmering as well as look at her own impact, and how she can make it more catastrophic than it was before.

December also brings the fourth season of DOOM PATROL (12/8), which opens with the team unexpectedly traveling to the future to find an unwelcome surprise. Faced with their imminent demise, the Doom Patrol must decide once and for all which is more important: their own happiness or the fate of the world?

From creators Bashir Salahuddin, Diallo Riddle, and Sultan Salahuddin, SOUTH SIDE (12/8) follows Simon (Sultan Salahuddin) and K (Kareme Young), two enterprising best friends hustling and dreaming their way through the Windy City – when they’re not too busy working as furniture repo men at the local Rent-T-Own. Shot on location in Chicago, the series also features cunning Sergeant Turner (Chandra Russell) and her clueless partner Officer Goodnight (Bashir Salahuddin), questionable local politician Allen Gayle (Diallo Riddle), and an ever-expanding roster of real-life Chicago residents, offering a glimpse at what it’s really like to live on the South Side.

The second season of SORT OF (12/1) is the season of love. Love includes friends, family, work, romantic love, and, most importantly, one’s self-love. Sabi decides that not only are they ready for some uncomplicated romance, but they also want everyone to love each other. Unfortunately, Sabi is faced with situations and relationships that are anything but simple, including their dad’s unexpected return from Dubai, the Kaneko-Bauers’ struggles as Bessy is released from rehab, and issues at Bar Bük.

Four-part docuseries BRANSON (12/1) takes viewers on an expansive and intimate 70-year journey, from Richard Branson’s upbringing as the son of a spirited, tough-love mother in Britain, to his pursuits of extreme, personal daredevilry that serve both to grow his businesses’ brands and feed his insatiable, lifelong thirst for high-stakes adventure.

Artist, musician, and filmmaker Terence Nance returns with a long-awaited second season of the acclaimed series RANDOM ACTS OF FLYNESS, which explores the metaphysics of Black life through avant-garde storytelling. Season two follows Terence and Najja (Alicia Pilgrim), a couple working towards healing generational wounds and reintroducing themselves to the ways of their ancestors. Each of the season’s six episodes explores a different dimension while presenting a rich tapestry of audio-visuals to illustrate the spiritual practice of Black liberation.

A HOLLYWOOD CHRISTMAS (12/1) follows Jessica, a young, up-and-coming filmmaker in Hollywood who has made a name for herself directing Christmas movies. But when handsome network executive Christopher shows up threatening to halt production on her latest movie, Jessica’s assistant, Reena, points out the irony: Jessica isn’t just trying to save her Christmas movie, she’s actually living in one.

Another batch of discovery+ titles will be coming to HBO Max on December 14 which will include SERVING THE HAMPTONS, SELLING THE HAMPTONS, TRIXIE MOTEL, and QUEEN OF VERSAILLES REIGNS AGAIN. Magnolia Network’s SILOS BAKING COMPETITION: HOLIDAY EDITION (12/9), which follows five home bakers across the country that are challenged to perfect a favorite holiday cookie recipe for a $25,000 cash price and a chance to have their winning treat featured on the menu in December at Chip and Joanna’s bakery, Silos Baking Co. Joining Joanna Gaines at the judges’ table are guest judges Andrew Zimmern (Family Dinner) and Zoë François (Zoë Bakes) will also make its way to the platform this month.

December 13
The Banshees Of Inisherin, 2022 (HBO)
Meet the Batwheels: The Best Present in the World, Season 1

Babies, Secret Romances, and the Dramatic Return of an Old Rival Revealed in the Explosive “Growing Up Hip Hop” Supertease

Ad-Supported Disney+ Plan Now Available in the U.S. with More Than 100 Advertisers Across All Major Categories at Launch 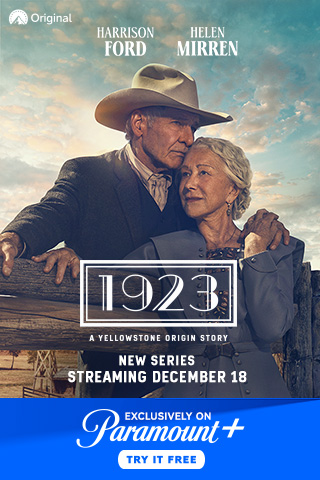